A Kick in the Shin

This past week, I attended an industry convention. It was amazing – the networking, the inspirational stories and the cool technology made it a great week. But it was not without its low points.  And unfortunately, those low points are what this post is about.

Now, you may be thinking, why focus on the negative?  Well, because the low points are bogus; they never should have happened, while all the good stuff was exactly as expected. 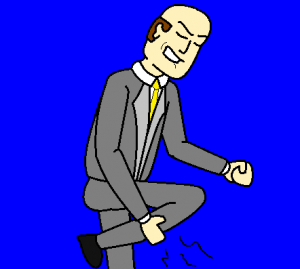 s standing in my company’s trade show booth, chatting with a few colleagues, when two additional colleagues joined us.  So, here we were, all 5 of us, talking in a circle: 4 men and 1 woman (me).  The two latecomers were unknown to me, and shortly after arriving, one of them stretched out his hand to me, and introduced himself.  The tall lug standing next to him, did no such thing.  This Lurch of a man was standing right next to me, ignoring me, and talking right over me (literally).  I was so flabbergasted that something like this – within my own inclusive corporate ranks – could happen.  Dumbfounded, I kicked that guy in the shin and said, “Hey, down here! I’m someone worth knowing!” Actually, I just did that in my head.  In real life, I stayed silent, made my excuses and left the group.

The following day, I had been invited to a luncheon meeting with a colleague and his customer, whom I had never met.  (It may be worthwhile to note, in all of my meetings at this conference, the men far outnumbered the women.)  I arrived on time to the meeting, and the three of us sat down to a lunch of sushi and meaningful discussions about solutions, technology and the healthcare industry.  All in all, it was a pretty standard meeting.

After lunch, the three of us walked back to the convention venue together.  Along the way, we bumped into another of my colleague’s customers.  Eager to have the two customers meet, my colleague quickly introduced them to one another, described their common areas of interest, and vowed to send them both emails so they could get to know one another.  I stood there, watching this exchange, apparently invisible.  It was then, that I decided to become very visible and I promptly introduced myself to the customer we had met on the street.  It was awkward, but dammit, I was not going to let it happen again.

I also decided to confront my colleague and share the faux pas that he had committed.  A genuinely nice guy, we have a solid working relationship, so I knew the conversation – while difficult – would probably be met with a big apology and greater understanding of the issue.

The next day, my colleague and I sat down to discuss how the luncheon appointment went.  After reviewing the conversation with the customer and action items, I broached the subject that was really on my mind.  I reminded him of how things went down on the street.  I shared that his failure to introduce me made him and me both look bad, but additionally, sent a signal to the customers that I wasn’t important – and one customer had just spent 75 minutes with me! Why should he waste his time with me, if I wasn’t even worthy of introducing to another customer?

As I expected, my colleague was kind, remorseful and grateful for pointing out the issue.  I’m fairly certain, it won’t happen again – at least not with him.

A Kick in the Shin Moment?

What about you? Have you ever been invisible? And what did you do about it?